Save Project to My Library

For more tips on creating with this collection watch the tutorial at https://youtu.be/kmqAVM6ibfM.

First make some hinges you do that to cut a piece of Cardstock at 1" x 12" then fold it in half on your score board then on the back of the paper on both sides of the score lines you put tape, then fold them.

Now get your pieces and lay them flat on the table and lay them like this: Back – hinge – Side – Hinge – Front – Hinge – Side – Hinge, now tape the hinges on the sides of the panels in the order how they lay in front of you, don’t tape the last one down yet because it will be easier to decorate! I will put a photo on my blog! On the inside of the windows you can adhere acetate behind the windows, you can also glue a back wall piece on the back and put some white cardstock on the inside panels, then you can close the garage! Now put on all the bottom and roof sides paper hinges on the inside!!!

Put designer paper on the outside of the garage at your own taste and ink the edges!

Get your bottom part and put designer paper on it. Put your garage on it and tape it down with the hinges, put a decorative paper on the floor and cut a scooter out and make a sign for in the garage I put a strip of acetate on the back and glued it down. I also made a closed sign and glued it on the door. For the hangers I used a sticker and cut it in length. Now you can attach the roof also on the hinges!

Get your wooden popsicle sticks and glue them on the roof, ink them using Vintage Photo ink. Cut out a border from the designer paper and glue little pennant banners behind it (I cut these out by hand form red cardstock). I also made a sign of 2 leftover pieces of the sticks and I glued 2 little chain pieces on the back and then I glued it under the roof. I fussy cut a ticket image of the paper and I put Crystal Lacquer on top let it dry. Then glue it on the sign!

I cut the dowel in the good size and put Vintage Photo Distress ink on it and glued it in between the bottom and the roof. Cut out some signs, mat them on red cardstock and glue them on the dowel. Then I adhered a piece of plaster rock and some greenery on front of the dowel.

For the gas pump (I have a pattern on my blog) print this, and cut it out of gray board. Glue the pieces together and cover the gas pump with red cardstock, take the smaller pattern and use that for the yellow cardstock. Put some gold sticker lines on them and glue a meter in the middle. I also put some Crystal laquer on that. Then adhere a black bead on the side, glue a piece of black wire in it and tape some silver duct tape on the end. Adhere it on top with the glue gun, and put some greenery in front of it, put some dots on the front with a pearl pen.

Now die cut a car image you like out of designer paper and glue that on top of the roof with a piece of acetate. Decorate it with some artificial greenery. Stamp some flowers using black ink on white cardstock from the window box fillers stamp, and die cut. In the center of each flower I used a pearl pen.

Now stamp, color and die cut a car you like and die cut the windows out, and glue 3 wooden blocks on the back. Then you die cut the same car out of red cardstock and glue this on the other side of the blocks. I colored the car with the markers and a silver marker and I used the pearl pen for the mirror and wheels. Glue the car in front of the pump.

I also cut out some gears from the Silhouette store and I made them a little bit rusty, and I put them next to the door and pump. 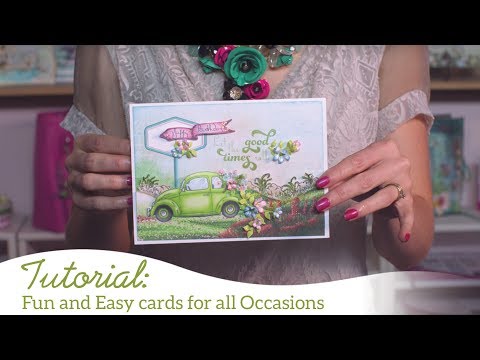