You can place orders but due to local COVID-19 restrictions, shipments are delayed and will resume as normal once the restrictions are lifted.

Save Project to My Library 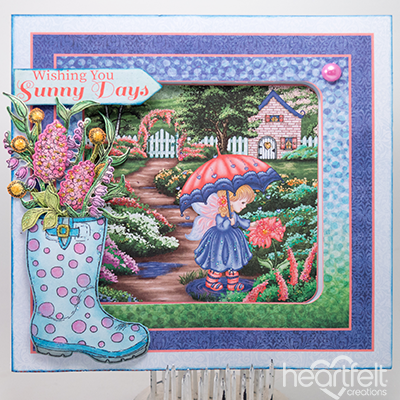 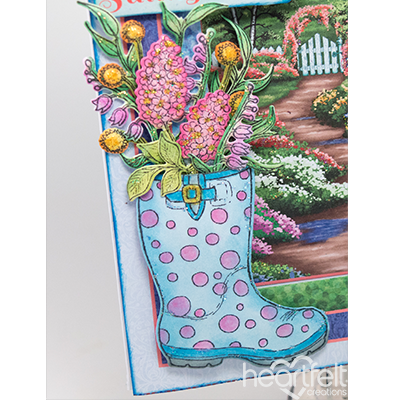 For more tips on creating with the Singing in the Rain collection, watch the tutorial at https://youtu.be/_J85LChrXSs.

On White Cardstock with Tuxedo Black Ink stamp every image except the heart shaped vine image using the Rain Boots and Blossoms Stamp Set and die cut all with coordinating dies. Using Stack and Store Daubers and the Dove Blender Pen as needed for fine detail, color the lilacs with Pixie Dust and Pink Petunia Chalk Ink; color the round flowers with Dandelion and Cantaloupe Memento Inks; color the bell flowers with Lulu Lavender Memento Ink; color the greenery with variations of some of the greenery and leaves using Pear Tart and Bamboo Leaves Memento Inks and the other half using New Sprout and Bamboo Leaves Memento Inks; color the rain boot using Summer Sky and Danube Blue Memento Inks, the polka dots with Lulu Lavender Memento Ink, the sole with London Fog Memento Ink and the buckle with Dandelion Memento Ink.

Using the Deluxe Flower Shaping Kit, shape the florals, greenery and the rain boot. Cut the florals and greenery as needed to make a bouquet in the boot, adhering to the card as shown using pop dots and Dries Clear Adhesive, as needed. 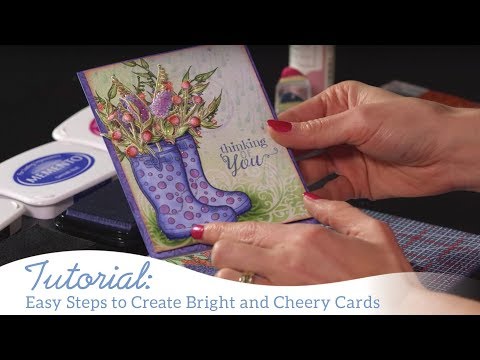