Under The Sea Shaker Memory Box

Under The Sea Shaker Memory Box 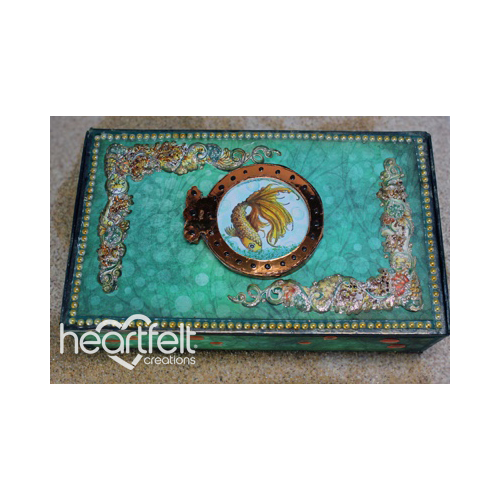 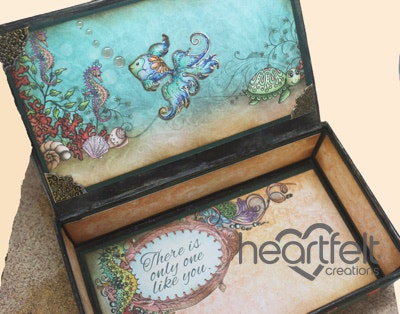 Spray the port windows with copper alcohol ink. This will give an aged, tarnished look. Position and glue fish image #1 and trim a circle to fit the port window. Adhere acetate to the underside of the second window and surround it with dimensional foam strips to add depth. Put some blue and green micro beads in the center of the image and place the top port window on top. You can cut some fine strips with the reserved foil cardstock and adhere around the sides of the window to give a finished look. This will hide the foam strips! Lightly spritz the remaining fish and coral on the underside with water and shape with your shaping tools and mat. I lightly applied texture paste to the underside for strength and allowed to dry – but this is totally optional.

The chipboard box was coated with black Dylusions paint with a small amount of blue and white for interest. I rubbed this in with my finger to allow it to blend with the black and to help give an aged look. Most chipboard boxes vary slightly in size, so rather than state the actual size I used, I suggest cutting each base layer 1/4" less than the length and width of the box panels. I measured my designer paper 1/4" less than the base layers. All layers and strips were adhered using double sided tape for strength. The top of the inside lid has designer paper with a beautiful scene and I adhered a colored fish for added interest. The bottom designer paper has a sentiment that added a nice touch when the box is opened.

The shaker window was glued securely to the top of the memory box. Two coral reef images, pearls and liquid pearls were added for embellishment. Ranger copper corner plates were added to the four bottom corners of the memory box. One can always add some additional corner plates to the inside lid as well. This completes the Under The Sea Memory Box.